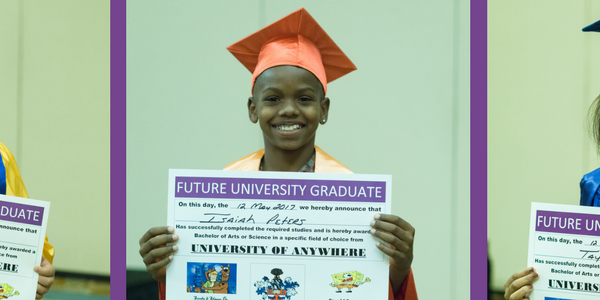 Forty years ago, I was in the third grade, just like these little faces we are celebrating as future high school and university graduates at the close of our annual meeting. We scheduled this ceremony with Alfreda Funnye and Jesse Jordan as a shameless hook to keep people around on a Friday morning when all of us are pre-occupied with thoughts of getting home. It works of course, because who can say no to such a hopeful experience? We are professional hopers, all of us who came to this hotel to trace the lines that take us from where we are to where we were. We have to be.

I find myself in a unique place at 47 years old. I started work at the shelter around Thanksgiving in 1998, and I could not picture my future much past Christmas, yet here I am. I know many of the pioneers who built this calling for me. I also know many of the new faces; the ones who show up to lead this mission one school run at a time. I stand in the middle of this bridge.

Senator Meadows takes the podium and delivers an invocation on behalf of these 10 children, dressed in caps and gowns, some acting silly, some very serious. He tells them where he came from and where he went. He looks 20 feet tall to me, so I can imagine how he must appear to them. They do not know one senator from the next, but they know someone important is telling them they are special, and they know he means it as much as he has ever meant anything. We lift our heads.

My hands are red and tender from clapping so much. The awards ceremony the day before carried me away from quality improvement reviews and legislative budget requests to the fight for each individual future on the basketball courts, doctor’s offices, rec rooms and board rooms where this network of people lock arms and hold these families together. My face hurts from laughing the night before as our founders, whom I know as a hard-grinding bunch mainly, indulged themselves—and all of us—in a candidly sincere reminiscence of how they pulled off this audacious vision we now tend. The “Queen of Swords” herself (past Executive Director Mary Dee Richter) relaxed in the middle of the couch, as if she had not a care in the world.

An old friend from back in the day catches my elbow. She has to catch a flight back to Tennessee. As we hug goodbye I cannot believe it has been 16 years since we first met as shelter managers in the Georgia hills. This former drill sergeant conducting Operation Future Graduation was there too, ever the reluctant social worker, the fervent social pioneer.

This Friday morning is a big moment for our little crew from Pablo Avenue. I am proud of us, and proud to be on this team. It isn’t easy tending to the daily business of being accountable for the well-being of other people’s children, and we share every stress our agencies carry. It is rare for us to stop and acknowledge our collective achievement. It is better to stay humble and keep grinding, so as not to jinx the future. For us it is all about year 41 now and keeping the faith.

Jesse calls out the name of each child. We go wild with applause and cheering. He repeats himself and we do it again, even louder. Ten children, 20 rounds of applause and one encore where we are all just clapping: for each other, for showing up, for making the Network work, for 40 years.

Watch “In our Absence, We are Present” with Jesse Jordan, Alfreda Funnye and John Robertson by clicking on the image below.

Learn more about this event which took place during our 2017 Annual Meeting!