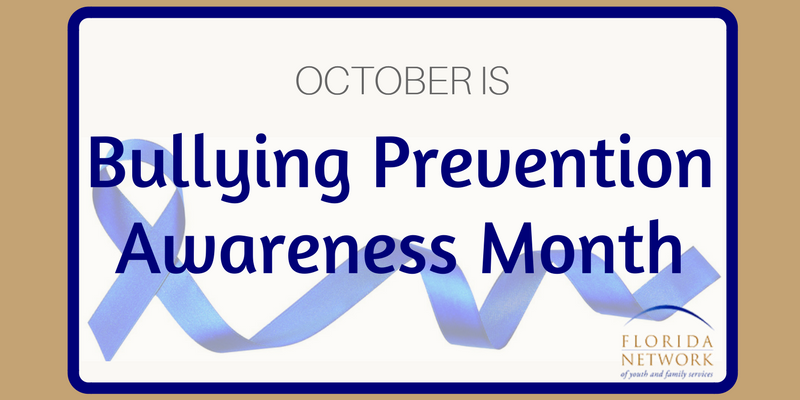 One of our primary goals at the Network is to foster healthy behavior in youth to promote strong families. Each October, the Florida Network takes part in National Bullying Prevention Month, a nationwide campaign founded by PACER’s National Bullying Prevention Center in 2006. This campaign encourages communities around the world to raise awareness of bullying, its effects and how to prevent it. The official color of the initiative is blue, which we wear throughout the month to bring attention to the issue and show support for bullying victims.

Bullying is a rampant issue among elementary, middle and high school youth. According to the National Center for Educational Statistics, 20.6 percent of students reported being bullied in 2016. That’s one out of every five students.

The CDC conducted a subsequent study on bullies and determined that students who engage in bullying behavior have been shown to have increased risk for academic problems, substance use and violent behavior later in adolescence and adulthood.

A study conducted by D. Lynn Hawkins, Debra J. Pepler and Wendy M. Craig proved that that more than half of bullying situations stop when a peer intervenes on behalf of the youth being bullied. Below are listed some safe ways to deal with and address bullying:

A resource that is extremely beneficial to ending bullying behavior is the Stop Now and Plan (SNAP) program. Throughout the 13-week program, youth participate in engaging activities such as group discussions, role-playing, interactive games and self-reflection to address topics including dealing with anger, learning how to cope and practice self-control, engaging in problem solving and learning not to bully and how to prevent bullying.

According to the Child Development Institute, participation in the SNAP program leads to fewer arguments and conflict at home, immediate decreases in delinquency and aggression, less bullying, less antisocial behavior and more positive interactions between teachers, peers and family members. The program has also been shown to reduce stress, anxiety, aggression and delinquency and improve social skills. These effects of the SNAP program can help improve relationships between child and parent as well as between child and peers.

We at the Network believe that if we can provide adequate education and resources to bullies and youth who experience bullying, we can help end bullying and prevent the lasting negative effects on youth’s lives. By supporting and implementing programs like SNAP, we can help prevent and end bullying.