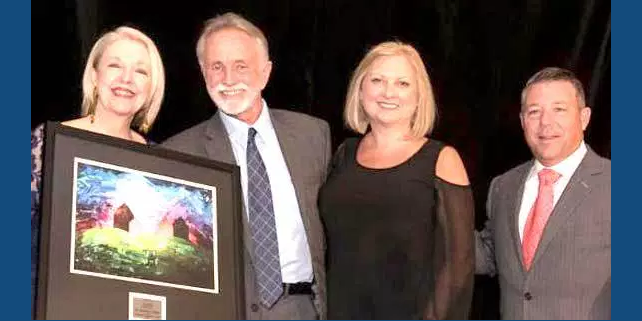 On July 31, the Space Coast Daily covered Florida Network’s presentation of the Chairman’s Leadership Award to Dr. Robert E. Lehton at our 40th Anniversary Celebration. Dr. Lehton is the Crosswinds Youth Services Board member and has worked diligently to better the lives of at-risk youth for over 43 years.

Dr. Lehton’s goal in his humanitarian work is to keep people out of confinement and “spiritual death.” He was ordained as a minister at the age of 19 and has since sought to point people to “spiritual life.” Dr. Lehton saw that once young people entered the justice system, they never seemed able to break free, so he works to keep them out of the justice system in the first place. This passion led him to help open the first runaway center in Louisiana in 1971. He moved to the Central Florida area in 1973 and became a founding force in Crosswinds Youth Services.

Dr. Lehton has served many positions on the board for 38 years, and he and his wife, Bunny, started a foundation in memory of their daughter, Amy, with hopes that the funds will eventually fund higher education scholarships for youth served by Crosswinds. He also help start Servant Air Ministries Inc., a non-profit that provides air transportation to help people in need and to advance the gospel. Dr. Lehton earned his pilot’s license and used it to transport ill people, provide disaster relief, and train others to do the same.

To learn more about Dr. Lehton’s achievements and to see the video shown at the 40th Anniversary Celebration, click here to read the Space Coast Daily’s story.