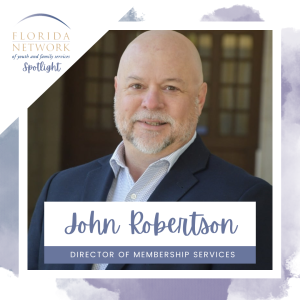 Q: What’s the most meaningful part of working with the Florida Network?
John: “Helping our frontline solve problems and find solutions in complex situations.”

Q: What do you wish you had more time for each day?
John: “Telling deeper stories about the people who do this work and how their collective effort makes our communities better in every way.”

Q: What book have you read that has impacted you most and why?
John: “ ‘The Catcher in the Rye.’ When Holden Caufield describes the only job he really wants, I feel like he is describing what we do. It struck a chord in me when I read it as a teenager and I can’t believe I was lucky enough to actually find that job.”

‘What I have to do, I have to catch everybody if they start to go over the cliff—I mean if they’re running and they don’t look where they’re going I have to come out from somewhere and catch them. That’s all I’d do all day. I’d just be the catcher in the rye and all.’ (J. D. Salinger)

Q: What keeps you going when you feel pressure or uncertainty?
John: “This work has shown me the greatest side of humanity. When the going gets tough I draw on the memories of a thousand moments of courage I’ve witnessed from the staff and the youth we serve. I don’t want to let them down.”

Q: What is something about the Florida Network you wish more people knew about?
John: “It was started by a small band of rebels determined to improve the odds for kids without a safety net. It still feels that way to me.”

Q: What’s your favorite weekend activity?
John: “Playing music in my Folk/Punk band, Squirrel Bullet. We hope to get a gig someday.”

Q: Who inspires you?
John: “Richard Stanton, who orchestrated the rescue of the soccer team in Thailand. Nobody thought his idea would work, but he believed in it against immense pressure. Deion Sanders, for what he is doing at Jackson State University. Mike Carroll, for returning to lead program operations for Lutheran Services of Florida after serving as Secretary of DCF. Every single Youth Care Worker who is picking up shifts and fulfilling our obligation to be there for families 24/7/365. I could name a lot more names. I tell them in person every chance I get.”

Q: What do you want your legacy to be?
John: “I’ve spent 20 of my 25 years in this field in a supportive role. I would be thrilled to just be remembered as someone who worked hard to be useful to good people.”